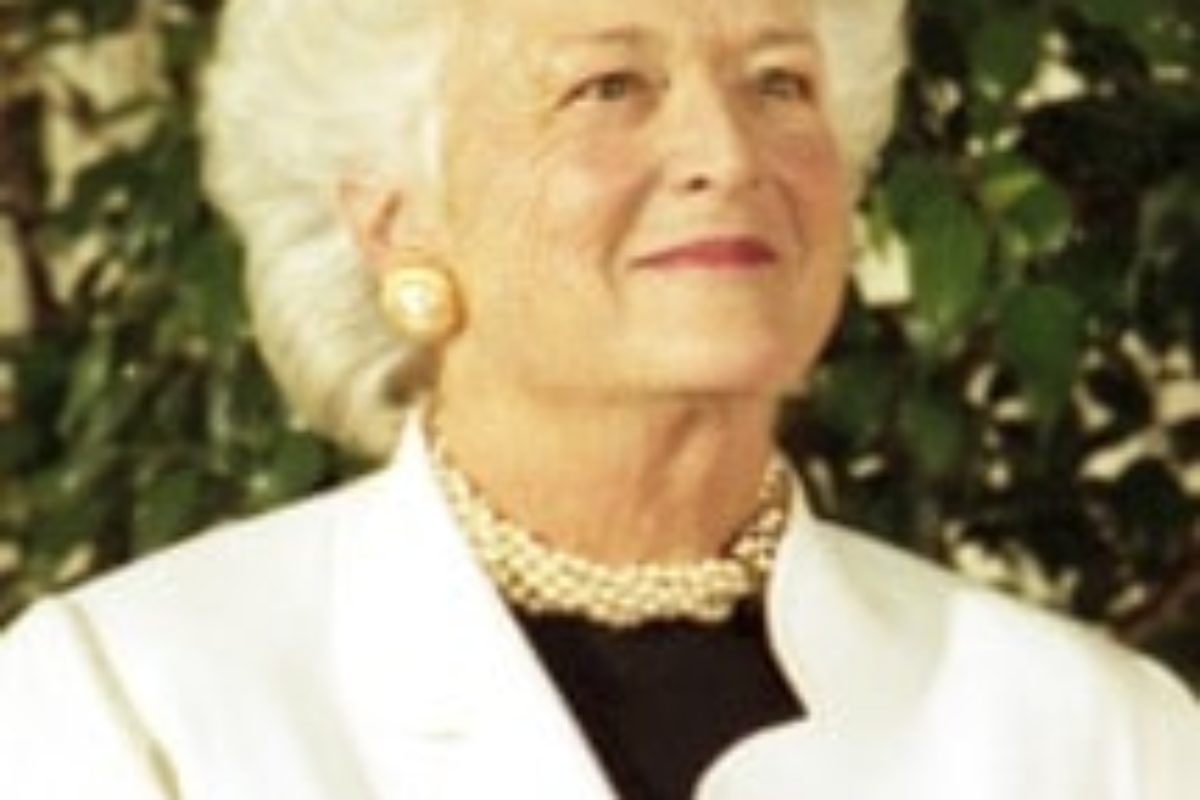 Barbara Bush, who died on April 17, 2018 at the age of 92, led a rich, fascinating life and was also very thoughtful when it came to her death.

She was known as someone of great compassion who also had an acerbic wit. (According to historian Jon Meacham, during her final days in the hospital, Bush jokingly asked a nurse if she wanted to know “why George W. turned out the way he had?” Meacham said she replied, “I smoked and drank while I was pregnant.”)

The story most often used to illustrate her kindheartedness is when she encouraged her husband to visit an AIDS clinic during his 1988 campaign for the presidency. This was at a time where there was a great deal of misconceptions about the disease, many people still thought it was communicable through touch. The following year as first lady, she spent time at Grandma’s House, one of the first homes created to care for infants infected with HIV. Mrs. Bush’s efforts did a great deal to change public perception and remove some of the stigma and misunderstanding about HIV/AIDS.

Even in her final days, she continued to show compassion. However, this time it wasn’t intended to be on a public stage; it was reserved primarily for her family. Before she died, Mrs. Bush’s family released a statement that she had made her wishes clear, and she would spend her final days at home with her family utilizing what the family termed “comfort care,” but is more commonly known as palliative care.

According to reports, her decision did not come as a surprise to her family. After all, Mrs. Bush assisted in founding the hospice program at the Washington Home for chronically-ill patients. Still, her decision has put both palliative care and the need for end-of-life planning in the national conversation.

Don’t procrastinate when it comes to your end-of-life requests.  Check out our upcoming schedule of workshops.

“It is not easy to talk to your family about end-of-life-issues,” said Catherine Hammond, founder of the Hammond Law Group.  “Sometimes it can be difficult to talk about these issues. But it is essential. If your family is unsure of your wishes – if you don’t have them clarified in legal documents – then, when something happens, they are left in the dark, having to make difficult decisions, and maybe even fight over those decisions. They may need to go to court to get permission to make medical decisions. Things often take an unfortunate turn when someone’s end-of-life wishes are not properly expressed.”

Unfortunately, only 56 percent of Americans say that they’ve had a serious conversation with a spouse, parent, child, or other loved one about their own wishes for end-of-life care.

That’s according to a recent joint survey from the Kaiser Family Foundation and the Economist. When asked to think about their own death, 54 percent of Americans say it is “extremely important” to make sure their family is not burdened financially by their care. While 48 percent want to have loved ones around them, 46 percent hope to be at peace spiritually, while 42 percent wish to die comfortably without pain.

Yet, according to the survey, just 27 percent of Americans have written down their wishes for end-of-life care. The most common reason they gave for not doing so is that they haven’t gotten around to it.

“How do you get people to stop procrastinating? Well, that’s tough. You can’t make someone go see an attorney to document their end-of-life wishes and give someone the power to carry them out. The best thing you can do is give them information and let them know it will be fairly easy once they take that first step. The people that are willing to take that first step and come meet with us, we’re going to do our best to make sure it gets done,” said Hammond.

There are three documents that are essential for providing piece of mind for your family:

“The documents are simple to fill out,” said Hammond. “And, while completing these documents is important, having a conversation with your loved ones about why you filled them out the way you did is equally important. That way, no matter how difficult the situation, your loved ones can make decisions on your behalf with confidence that its exactly what you would want.

“For people who are just not comfortable having this conversation, using a compassionate attorney, somebody that does this every day, can help make these important topics easier to talk about. We can provide a safe environment and open forum to talk about these very important matters. We can guide the conversation through the vital issues.”

A healthcare power of attorney assigns someone of your choosing to make healthcare decisions in the event you are unable to do so.

A living will expresses your wishes regarding end-of-life decisions in the event you have a non-reversible, terminal condition.

A universal HIPAA release enables people specified in the document to receive updates from your doctors about your medical condition.

Our upcoming workshops can help you educate you and your family as you pass along your legacy.